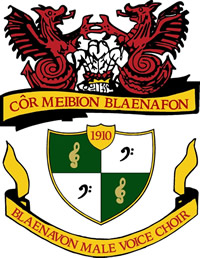 he Choir - over one hundred years old and busier than ever. Blaenavon Male Voice Choir has been an institution in the town for a century and celebrated its centenary in 2010. The official founding of the Blaenavon Male Voice Choir took place in 1910, although organized male harmony singing in the Welsh town of Blaenavon may go back as far as 1873. Numbering about 55, ranging in age from teenagers to people in their eighties, and drawn from towns around Blaenavon, the choir is primarily occupied in performing concerts for charity purposes, but it now does quite a few weddings each year and has toured in Europe and North America, and accompanied many bands and opera singers. The Choir is very fortunate to have the services of an excellent musical team led by the extremely talented Musical Director Mr Gareth Whitcombe, who is ably supported by our Deputy Conductor Mr Ossie Arnold - and our pianist Sara Humber.

The Choir has had successful tours to Cork, Norway, Hungary, France the USA on 3 occasions and Canada. In 2007 travelled to Spain and in 2012 to Jersey. These tours combined with concerts in all parts of the UK make it a very busy - but enjoyable time for members of Blaenavon Male Voice Choir. Recently a DVD recording “Save our Choirs” was made about the choir an is now on general sale – narrated by the ex Welsh Rugby player Gerald Davies CBE DL

The Choir have been given the privilege of singing at the Wales v Scotland Rugby International match in February 2018 – should be good !!