Massive investments in the port of Antwerp are coming in the next few years. The SEA-Invest group is planning construction of a new tanker terminal in the Delwaide dock representing an investment of 250 million euros. In the same dock the group will also operate an independent container terminal that it has acquired from Independent Maritime Terminal (IMT). This facility is currently located in the Hansa dock but will be moved to the Delwaide dock where there is space for further development with an additional investment of 50 million euros. Other new activities not directly related to the waterfront will help to reutilise the space released in the Delwaide dock. 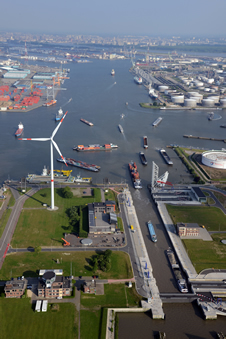 In the meantime a location has been found for the Houston-based international terminal operator Zenith Energy. Given the size of the project which this company wishes to carry out in Antwerp, and taking into account also the limited quay length available in the Delwaide dock, an alternative site has been chosen on the Right bank of the Scheldt. Zenith Energy already has a presence in Amsterdam but wished to find a second location in the strategically very important ARA (Amsterdam-Rotterdam-Antwerp) region, and the choice finally fell on Antwerp where the company will ultimately invest 250 million euros.

In the Hansa dock, meanwhile, the SEA-Invest subsidiary SEA-Tank Terminal will build additional tank capacity for Total on the concession that it acquired from the IMT container terminal, representing an investment of 100 million euros.

Sea-Tank Terminal is building the tank terminal on behalf of a major world player that aims to use the port of Antwerp as a base for import, export and transit of all its petroleum products in the ARA range. The planned capacity of the project in the first phase is 750,000 m³ for storage of refined products that will be carried to and from the terminal by barge and seagoing ship. The freight volume generated by this activity is estimated at 13 million tonnes annually. Additional capacity may be built in a second phase of the project.

Independent Maritime Terminal: move from the Hansa dock to the Delwaide dock, with a view to expanding its container handling activities

Acting through its subsidiary Belgian New Fruit Wharf (BNFW), the SEA-Invest group has already negotiated with various deepsea container lines. The acquisition of IMT by SEA-Invest will enable its other subsidiary SEA-Tank Terminal to build a new liquid bulk facility in the Hansa dock for the latter’s customer Total. However the IMT activities will be moved to the Delwaide dock where more waterfrontage is available to accommodate the future expansion. SEA-Invest therefore acquired the independent container terminal one month ago. IMT, which last year handled 250,000 TEU, will be able to further expand in the Delwaide dock. The Port Authority for its part recognises the strategic importance of an independent container handler having the opportunity to continue operating in the port of Antwerp and so being able to handle smaller freight volumes. The space vacated by IMT in the Hansa dock will be filled by a new liquid bulk facility.

Among the proposals submitted for the Delwaide dock was a project put forward by the international terminal operator Zenith Energy. As plans for repurposing the Delwaide dock progressed and the possibilities emerged for converting activities in another part of the port, the Port Authority found another location for Zenith.

Headquartered in Houston, Texas, Zenith Energy is active in storage of liquids and bulk products. It concentrates on acquisition, construction and operation of terminals in Latin America, Europe and Africa. The company carries out storage and distribution of petroleum, refinery products, natural gas liquids and petrochemical products. To supplement its terminal in Amsterdam, Zenith is anxious to have a second terminal in the ARA region. Once the concession has been granted Zenith will be able to build 500,000 m³ of storage capacity in the first phase, after which it wishes to expand rapidly to 1,000,000 m³.

In addition to investments in the Delwaide dock SEA-Invest is also investing in the Hansa dock where it has acquired the container terminal from IMT. On this concession site it will initially build additional tank capacity of 160,000 m³ for Total, with further potential for expansion. The additional capacity will act as an extension of the neighbouring SEA-Tank Terminal facility. The existing terminal became operational in 2010 and was expanded by 340,000 m³ in 2013. It currently has a capacity of 860,000 m³.