Major success for PEFTEC 2017 in Antwerp

With visitor numbers increasing by over 10%, the organisers of PEFTEC 2017 have expressed enormous satisfaction with the success of the event. “The feedback from delegates, presenters and exhibitors has been overwhelmingly positive,” says Marcus Pattison. “It is clear that PEFTEC has become an important date in the diary of anyone involved with testing and monitoring in the petrochemical, oil and gas sectors, and we are already starting to plan for PEFTEC 2019.” 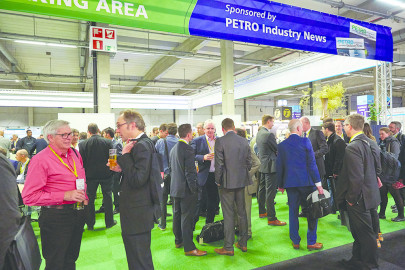 PEFTEC is a specialist event focused on the testing, analysis and monitoring of downstream oil products, chemicals and petrochemicals. Created to provide the latest guidance on regulations, methods and technologies for analytical chemists, scientists, process operators, laboratory personnel and environmental managers, PEFTEC 2017 included four major conferences focusing on analytical techniques, environmental monitoring, methane measurement and safety issues in hazardous situations. With growing concern about recent increases in levels of atmospheric methane, the methane measurement conference was particularly well attended throughout both days. Speakers outlined current research looking at technologies, methods, Standards and regulations relating to the measurement of methane emissions. Speakers explained that this work is helping to identify the sources of recent increases and to identify potential mitigation measures.

Covering testing and monitoring in the laboratory, in the field and on-site, a major international exhibition ran alongside the conferences featuring over 150 of the world’s leading providers of analytical testing and monitoring equipment and services, providing visitors with an opportunity to see the whole sector in one location.

Highlights from the PEFTEC Analytical Conference

•    Vacuum UV Spectroscopy is not a flash in the pan!

PEFTEC 2017 hosted a successful 2-day conference on the latest trends and developments in analytical techniques for the petrochemical industry which generated very positive feedback from delegates, presenters and exhibitors. In this article we try to capture some of the key messages emerging from a diverse range of presentations covering upstream and downstream applications.  The conference was organised under 4 themes of importance to the industry – Elemental Analysis and Speciation, Mass Spectrometry, Chromatography and Separations, and Spectroscopy and On-Line Analysis and it was clear that there were several key technique areas which dominated in multiple themes.

HRMS, both with direct sample introduction and in combination with pre-separation techniques, continues to grow as the premier technique for advanced compositional analysis of petroleum samples and this was reinforced by many presenters at the PEFTEC Conference.

Professor Wolfgang Schrader (Max Plank Institute, Mulheim) gave an overview of the technique and introduced data processing techniques such as double bond equivalents, Kendrick mass defect and Kendrick mass plots which are employed to simplify HRMS data analysis and visualisation. Wolfgang then introduced different ionisation techniques for HRMS and described how they show different selectivity’s for key components in crude oil characterisation. He went on to discuss the qualitative and quantitative aspects of the techniques and the use of chromatography and ion mobility as pre-separation techniques to improve class type and isomer analysis in crude oils.  Professor Ralf Zimmermann (University of Rostock) described the application of thermal evaporation techniques, including thermo gravimetric analysis and direct insertion probe, combined with a range of hard and soft ionisation techniques and HRMS for the characterisation of heavy petroleum and residue fractions.

Sam Whitmarsh (BP) discussed the application of HRMS techniques for a range of real world business applications including the characterisation of asphaltenes, the detection of upstream processing additives of relevance to refinery operations and resolving problems with emulsion formation in refinery desalters.  He went on to describe the application of HRMS to provide unique insights into fuel additive chemistries and the characterisation of lubricant base oils by Field Ionisation Mass Spectrometry (FIMS) and lubricant additive systems using a combination of Field Asymmetric Ion Mobility Spectrometry (FAIMS) and HRMS to reduce matrix effects.

Since its first description by John Philips in 1991 comprehensive two-dimensional gas chromatography (GCxGC) has been promoted as a must-have technique for the petroleum industry (primarily by academics and vendors) but for many reasons had not been widely adopted in industry.  At PEFTEC the technique was presented for a number of important application areas demonstrating that it is now mainstream, and it was clear that improving hardware and data processing software were major contributing factors. Software developments, including the application of automated scripting to assign compound classes and develop sample fingerprints, were common features in many of the presentations

Thomas Groger (Helmholz Centre Munich) presented the combination of GCxGC with various detector systems for hydrocarbon characterisation including PIONA analysis for the complete characterisation and quantification of middle distillates, High Temperature Simulated Distillation of crudes, heavy oils and spindle oils and the use of Thermogravimetry (TGA) as an alternative inlet system for the full molecular weight characterisation of petroleum.

Pierre Giusti from Total gave an excellent and wide-ranging presentation which included the application of GCxGC with FID, sulphur specific and nitrogen specific detectors to produce element specific molecular fingerprints of diesels and vacuum gas oils.

Laura McGregor (SepSolve Analytical) described the application of reverse fill/flush GCxGC with FID for the determination of Total Petroleum Hydrocarbons (TPH) in soil extracts using compound grouping via software stencils and claimed significant savings in consumables costs to justify the return on investment.  She also described the application of GCxGC with parallel FID and TOF-MS combined with software scripting to generate sample “signatures” which allows the rapid comparisons of samples.

The ultimate proof that GCxGC has been adopted by industry was provided by Melissa Dunkle who described how Dow Benelux are using it off-line and on-line on a daily basis in research, development and manufacturing processes to provide both qualitative and quantitative information on feedstocks, natural gas condensates and fractions from high throughput catalyst screening

In recent years Supercritical Fluid Chromatography (SFC) has seen a major revival, especially in the pharmaceutical sector, which has driven new instrumental developments and there is clear evidence that there is still scope for the application of the technique in the petrochemical field. Didier Thiebaut (ESPCI Paris) gave an overview of supercritical fluids and their unique benefits for petroleum separations including simulated distillation and group type separations. The ease of hyphenation of SFC with other techniques such as GC, GCxGC, HPLC and  comprehensive SFCxSFC was also described.

Professor John Langley (Southampton University) covered the application of SFC-MS for a number of applications including gasoline, detergents, surfactants, vegetable oils and biodiesel.

In addition to the techniques already covered many other hyphenated techniques featured in the presentations.  Luca Godina (Agilent) described the analysis of arsine and phosphine in ethylene and propylene with a dedicated GC/MS analyser, Rosa Penalver (SABIC) presented the characterization of fouling material by TGA-IR, Frank David (RIC) on multidimensional GC and Gerd Vanhoenacker (RIC) presented on 2D-LC Solutions for Petrochemical Applications.  Pierre Giusti (Total) described a plethora of hyphenated techniques in a presentation titled “Molecular Characterization in the Oil Industry, from Speciation to Metallopetroleomics and Petrointeractomics” where he delivered a masterclass in petroleum characterisation. In addition to applying most of the techniques described above he also employed a range of separation techniques hyphenated with ICP-MS and ICR-MS for metallopetroleomics to explain some properties at the supramolecular level and introduced the concept of molecular interactomics.

Flow Injection Analysis had its heyday in the 1980s as a technique to automate wet chemical analysis methods via the controlled dispersion of an injected sample in a flowing stream.  The sample could then be subjected to a range of physical and chemical processes to provide fast accurate automated systems which were generally capable of much higher throughput than the original method. The technique made a surprise comeback at PEFTEC when Lou Chen (Da Vinci Laboratory Solutions) presented a flow injection analyser based on modified HPLC instrumentation for “Fast Trace Peroxide Analysis in Hydrocarbon Process Streams” which had significant advantages over conventional methods. It remains to be seen whether this will spawn a revival of interest in the technique for other applications.

VUV spectroscopy was introduced as a new GC detector in 2014 and has had a major impact on the industry as it delivers many of the features of the ideal GC detector.   Professor Kevin Schug (University of Texas at Arlington) was a pioneer of VUV spectroscopy and gave an excellent introduction to the technique and its application.  VUV provides universal and selective detection with unique spectra which show class similarities and allows the deconvolution of coeluting analytes and the automated classification and speciation of mixtures.  Spectral absorbance follows Beers Law, so the detector has good quantitative performance and, as a non-destructive flow through detector, it is complementarity to coupling with mass spectrometry especially as it has the ability to optically differentiate isomers. Professor Schug then described the application of the technique for the analysis of PCB congeners and the characterisation of weathered diesel fuel samples.

Thomas Groger (Helmholz Centre Munich) gave a presentation based around practical applications of GC-VUV and gave an overview of ASTM D8071 (the Standard Test Method for Determination of Hydrocarbon Group Types and Select Hydrocarbon and Oxygenate Compounds in Automotive Spark-Ignition Engine Fuel Using Gas Chromatography with Vacuum Ultraviolet Absorption Spectroscopy Detection (GC-VUV)). He presented comparison results showing good agreement with the more established Reformulyzer technology and including results for oxygenated blends. He then went on to describe the application of the technique for water contamination of oxy-blends, the detection of high boiling impurities and the application of GCxGC VUV for the analysis of diesel and middle distillate samples.  It was clear that the scope of the application of VUV will only expand going forward as practitioners explore new application areas.

The analytical techniques conference is now a key component of the biannual PEFTEC event and provides delegates with insight into the latest trends in analytical technique research and development in the petroleum industry. It provides a perfect complement to the other PEFTEC activities namely the exhibition, vendor seminars and environmental conference to provide a one stop shop for visitors interested in any aspect of Petroleum, Refining and Environmental Monitoring technology.  The 2017 analytical conference featured developments in key technology areas presented by leaders in their field and was very well received by delegates.