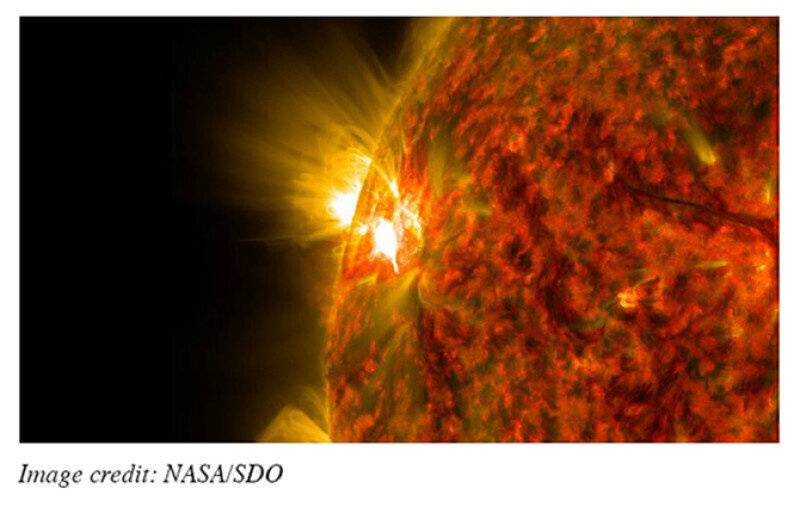 The UK’s ability to predict solar superstorms and other severe space weather events is to get a significant upgrade with the launch of two major research projects led by the University of Birmingham.
The research is part of a £20M programme called SWIMMR (Space Weather Instrumentation, Measurement, Modelling and Risk), funded by UK Research and Innovation and designed to deliver improved monitoring capability to the UK’s Met Office. As part of this programme the University of Birmingham will lead a £3.7M effort in better understanding the Earth’s upper atmosphere (ionosphere and thermosphere).
Turbulent space weather, largely caused by radiation, energetic particles and plasma emitted by the Sun, can cause huge disruption on Earth. Whilst the Earth’s magnetosphere, a powerful magnetic field that surrounds the Earth in the upper atmosphere, protects us from day-to-day space weather, extreme events can overcome this planetary defence with potentially severe consequences. Risks include widespread and long lasting power cuts, disrupted satellite, GPS and radio communication technologies, and air passenger and astronaut safety.
Extreme space weather has been included in the Government’s National Risk Register – an overview of the key emergencies which could cause significant disruption in the UK – since its 2012 update. The likelihood is currently judged to be comparable to that of an emerging infectious disease.
The Birmingham-led consortium draws together the UK’s principal experts in upper atmosphere modelling from Lancaster University, the Universities of Bath, Leicester, Leeds and Southampton and the British Antarctic Survey.
Data modelling technology developed at the University of Birmingham will underpin the work. This technology is capable of predicting space weather with unprecedented speed and accuracy, monitoring the density, winds and temperatures of chemical species in the Earth's atmosphere and triggering warnings when there are likely to be impacts on services and infrastructure.
The first project will explore ways to deliver effective monitoring of the ionosphere, the charged part of the Earth’s upper atmosphere. This region can disrupt communication with aircraft and render GPS positioning systems inoperable. The second project will investigate the thermosphere, the neutral part of the Earth’s upper atmosphere, which affects the orbits of satellites which, without suitable modelling, can result in satellite collisions. By the end of the grant the developed models will be deployed operationally at the UK Met Office.
Dr Sean Elvidge, in the School of Engineering at the University of Birmingham, says: “The expertise we’ve developed here at Birmingham puts us in a great position to make a really significant contribution to the UK’s space weather forecasting capabilities. Only by providing sufficient advance warning, and having robust plans in place for reacting to an extreme event, can we be confident of minimising disruption – and possibly averting disaster.”
The most extreme space weather event on record  occurred in 1859, when a huge solar flare and associated major coronal mass ejection reached the Earth. This affected telegraph systems around the world, giving operators electric shocks and, in some cases allowing telegraph operators to continue sending and receiving messages despite the power supplies having been cut. The northern lights, the attractive consequence of space weather, was seen as far south as the Caribbean.
“This level of extreme event tends to occur every 100 years or so,” says Dr Elvidge. “While it’s not possible to be overdue an event of this nature, it is likely that one will occur sometime before the end of this century.”
Simon Machin, Space Weather Programme Manager at the Met Office, said: “The SWIMMR Programme will be fundamental in bridging the gap between UK academic excellence in a variety of space weather fields and pulling this through to inform operational services, which are vital to inform mitigation strategies for government and industry.
“We look forward to working alongside Birmingham and others to realise this potential and deliver a step-change in national capability that further enhances the UKs reputation as a world leader in space weather science and services.”
“The world leading work to be performed by the Birmingham led consortium will specifically lead to a great enhancement of the Met Office capability to provide tailored services for users of satellite enabled Position, Navigation and Timing (PNT), satellite and long distance communications, radar users and satellite operators.”